Graduation and retention rates of undergraduates in Minnesota's postsecondary institutions

Graduation is a goal of most new-entering full-time students entering Minnesota colleges and universities; however, not all of them complete their studies at the same institution as they entered. While some students will leave to transfer and complete somewhere else, others will drop out of college altogether.

The graduation rates shown track graduation rates of first-time, full-time students who entered a four-year institution six years prior to entry and completed a bachelor’s degree at that same institution. At Minnesota’s State Colleges (public two-year) graduates are tracked three years prior to entry. The State College’s transfer-out rate is also included since many of those institutions serve students who intend to transfer before receiving a credential. Transferring is seen as a successful outcome of the mission of State Colleges.

There are two data sources of retention data available.

First to Second Year Retention in a Minnesota Postsecondary Institution by Race/Ethnicity, 2006 to 2015 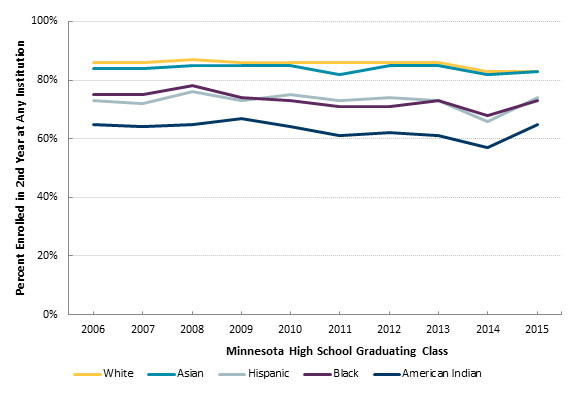 The graduation rates reported here were developed by the U.S. Department of Education's National Center for Education Statistics, to be used for the Integrated Postsecondary Education Data System (IPEDS), Graduation Rate Survey. These national standardized rates were devised so graduation rates could be compared across institutions.

The graduation rate tracks a cohort of students (defined as new-entering, full-time, first-time, degree-seeking) from their time of initial enrollment in an institution until they complete their program within 100%, 150% or 200% of normal time to program completion at the same institution. The standard reported rate is 150% of normal time. For a bachelor's degree program students graduating within six years are successful completers, while associate degree or certificates below bachelor's degrees completed within three years are successful completers.