In 2014, 69 percent of Minnesota's public high school graduating class of 2014 attended a postsecondary institution the following fall either in Minnesota or elsewhere.

The rate includes students enrolling in Minnesota and out of state and at all types of colleges from vocational two-year to four-year. Minnesota's rate tracks with national trends.

Note: college enrollment rates leave out students not graduating from high school. Since there are large gaps in Minnesota public high school graduation rates by race/ethnic background even less students who are American Indian, Black and Hispanic attend college than their White and Asian younger aged peers. 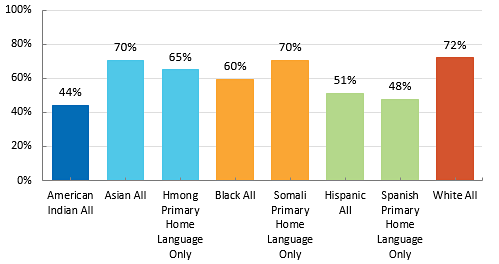 
Nationally, immediate enrollment in college also varies by race and ethnicity. Of the 3 million high school graduates in 2013, 66 percent, enrolled in college the following fall. White student college enrollment (67 percent) was higher than the rate for those who were Black (57 percent). The national rate for those who were Hispanic (66 percent) was similar to White students. The immediate college enrollment rate for Asians (81 percent) was higher than the rates for Whites, Blacks, and Hispanics in 2013 and in each year since 2003. 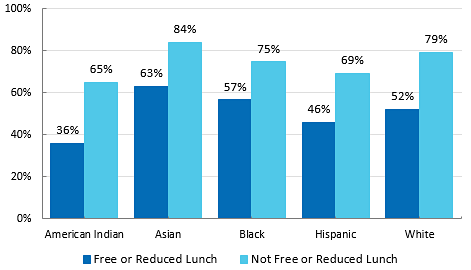 
College enrollment gaps by family income are also reported nationally. The college participation rate for high school graduates from high-income families (80 percent) was 31 percentage points higher than the rate for those from low-income families (49 percent).

Minnesota needs to break the cycle of lower-income students or students of color lower college participation rates. Minnesota's challenge moving forward is to successfully prepare and support underserved populations to certificate or degree completion while meeting future workforce demands in a period of changing demographics. Minnesota needs to increase access to degrees that open doors.